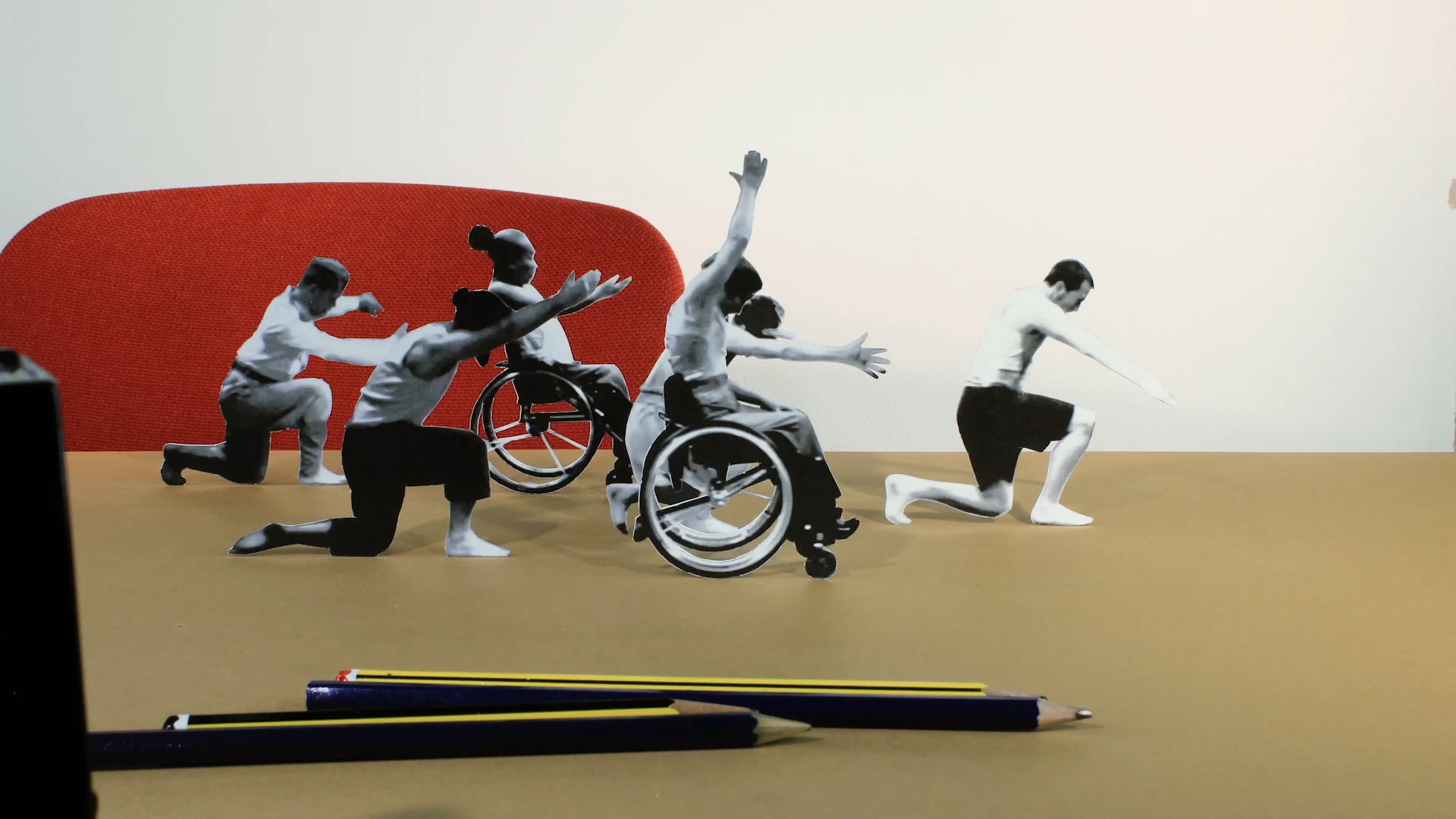 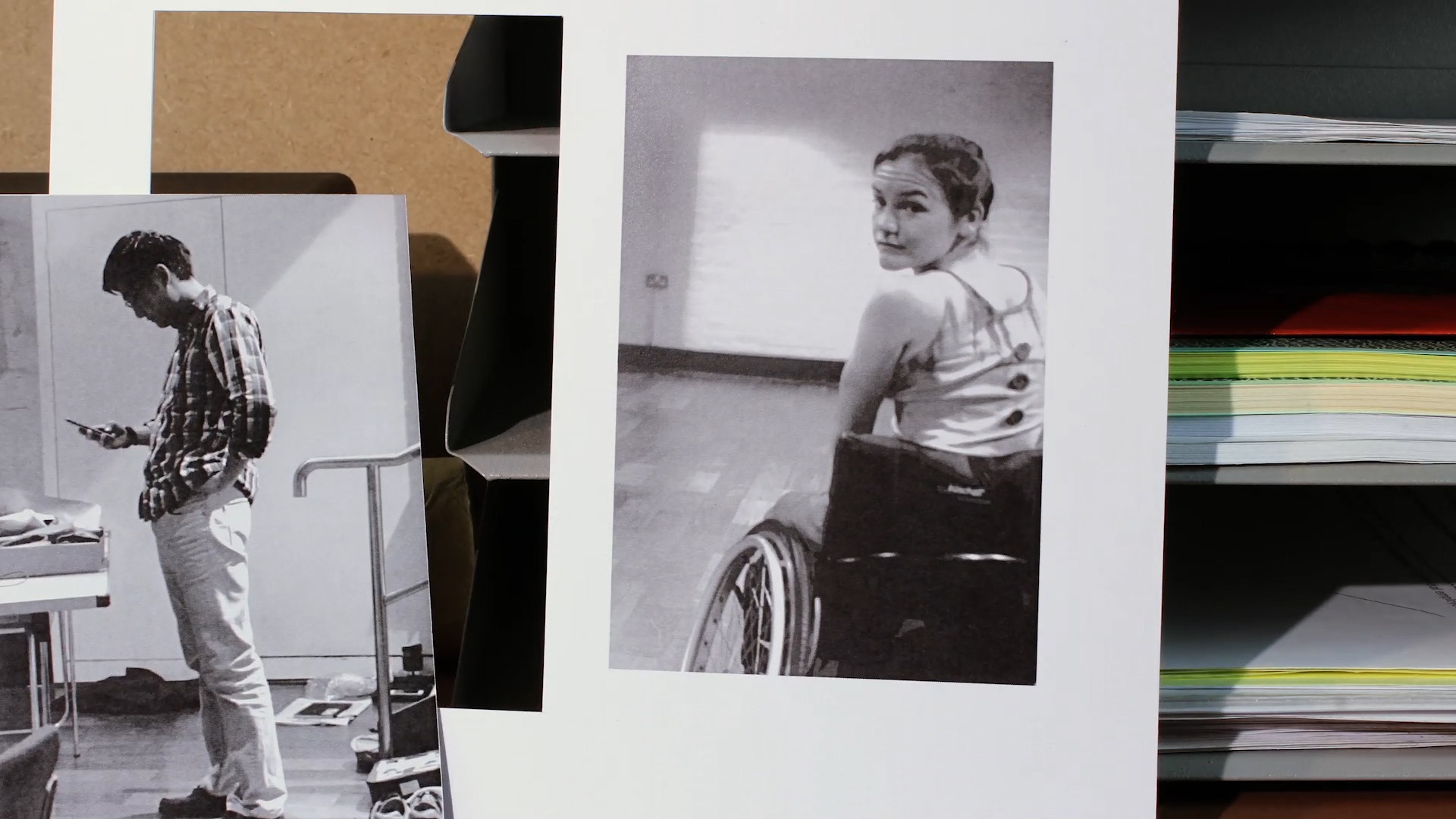 Photographs of performers in an inclusive dance company come to life. The individual artists dance out of the photos and across table tops until the whole company meet and perform in unison. Combining live action and stop motion animation techniques, this originated as a promotional film made for Stopgap Dance Company.

Describe, in as many or as few words as you see fit, the genesis of or inspiration behind Stopgap in Stop Motion?
“Stopgap…” was a commission but the brief from the dance company was very open: they just asked that I mix animation and live action and that I showcase the individuality of the dancers, so I was allowed a lot of creative freedom. The concept for photos coming to life came from Stopgap’s website that is designed to look like a scrapbook. I had the idea of animating the photos on the desks that the scrapbook is being assembled on. Another inspiration was the company’s production office which is very chaotic and eccentric, and also the rehearsal process: from this seeming chaos harmonious performances emerge.

2 How long did Stopgap in Stop Motion take to film? How long was post-production?
Oh, it took sooo long. That’s usually the nature of animation. I’ve never actually tallied up the hours I spent but to give you an idea: each of the cut out figures took about 10 minutes to cut out (that excludes the printing and sticking them to card). You can double that time if the dancer used a wheelchair. I didn’t think about wheelchair wheels when I proposed the idea of using cut outs. There are (most of the time) 12 cut outs per second for each dancer. The animation of the cut outs was also time consuming. There are a couple of shots where all six dancers are dancing together as cut outs. These shots (which are only about 2 seconds long) took around 9 hours each to film. The first one took me 5 takes before I got it to work. It’s a little frustrating when you are 5 hours
into a shot and something goes wrong so you have to stop, switch everything off, and start again the next day. Eventually I got the shot by shutting myself in the studio with sandwiches and bottled water and not leaving until it was done.

A lot of editing decisions are prior to animating. You don’t want to spend a lot of time making things and animating only to drop the shot and leave the work on the cutting room floor. The grading and cleaning was done by a friend who did it in his spare time. Again, I haven’t counted up the hours spent.

If this is your first dance for film production, what are a few things you learned about making a dance for film that surprised you? If this is not your first dance for film production, what are a few things that you are continually trying to refine or learn as you have sought to work thru this medium of dance and film together?
This is my first dance film. Given that, I was surprised that I had instinctively made some decisions that were met positively by people from the world of dance. One of these was to have quite long takes so that you can see the dancers dance rather than the art of the editor cutting quickly from shot to shot. This was good from the point of view of capturing dance but gave me the problems of very long animated shots, as described above. I also had an interesting conversation with the composer for the film, Dougie Evans, who makes dance films himself.

I’m a narrative filmmaker so one of my early thoughts was about character motivation: “Why do the dancers start dancing?” (this is why I included the mobile phone as a narrative device). Dougie was intrigued by this because he’d never thought about it that way. He said, “I just think, they’re dancers so they dance”.

What is interesting or intriguing to you about dance for film vs. dance for stage? Or, if you are coming from a film background and working with dance is a more new medium for you, what drew you to wanting to capture and work with dance?
As I said, I’m a narrative filmmaker and this is my first dance film. I was immediately excited by the possibility of working with a dance company when I was approached to do it. I was aware that it presented the opportunity for a very creative collaboration.

Are there any projects, dance film or otherwise, that you are working on currently that you would like to share with our audience?
I’m currently working on a narrative film that uses a similar mix of live action and animation, frames and cut outs, as that used in “Stopgap in Stop Motion”. It’s entirely set in a fairground and will involve building fairground sets instead of desktops.